VOYTEK PRONIEWICZ
Music inside me 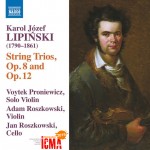 Karol Lipiński built a distinguished career in the 19th century. In Vienna, he met Luis Spohr and, in Piacenza, in 1818 he performed together with Nicolo Paganini whom he competed against to win the title of the best violinist. In Paris, it was Chopin who helped him organize a concert. From 1839, he stayed in Dresden where he took up a position of a concertmaster at the Court Orchestra. That was where he played with Ferenc Liszt, cooperated with Richard Wagner and made friends with Robert Schumann. Karol Lipiński was one of the first before Fryderyk Chopin, who made the polish music culture worldwide known.

The violinist Voytek Proniewicz and pianist Wojciech Waleczek have been performing in a duo for a couple of years. Their concerts have been enthusiastically received not only by audiences in many Polish cities but also in Vienna, Prague, Brussels, Catania and Palermo. The artists give classical chamber recitals with the world’s most famed works from the violin literature which range in music epochs from baroque to contemporary music. They present special repertoire to commemorate birth or death of famous composers.

Chopin and his pupils 2010
Chopin’s Bicentennial

Voytek Proniewicz has been performing alongside the Sinfonia Viva Orchestra for many years. As conducted by Tomasz Radziwonowicz, he has played on numerous occasions in the Warsaw National Philharmonic Hall and Witold Lutosławski Concert Studio of the Polish Radio. In May 2009, in Saint Anne’s church in Warsaw they gave a premiere performance of Krzesimir Dębski’s “Dos Lid Far Jidisze Fidl” for violin and string orchestra. The same year, the Polish journal “Gazeta Wyborcza” published a series of CDs with the music of great movie composers. Voytek Proniewicz participated as a soloist and concertmaster in the recording of Waldemar Kazanecki’s music. The CD earned a Gold album award.

An exclusive repertoire of Polish composers

Voytek Proniewicz brings special attention to the output of Polish composers. Not only to the most famous one, such as Fryderyk Chopin, Henryk Wieniawski, Ignacy Jan Paderewski, Karol Szymanowski, Witold Lutosławski, Krzysztof Penderecki but also to those who may not have marked their presence in the international awareness and yet whose compositions are equal to the works of the greatest European composers: Karol Lipiński, Ignacy Feliks Dobrzyński, Karol Mikuli, Józef Nowakowski, Zygmunt Noskowski, Roman Maciejewski.

The newest album from the Naxos record label with the music by Ferenc Liszt for violin and piano will be one of the most important events on the international publishing market. It is a great honor for the artists Voytek Proniewicz and Wojciech Waleczek to be participating in this project. They will be the first Polish artists to immortalize on CD this exceptionally difficult, and thus, rarely performed repertoire. Naxos has the most widely-spread CD distribution network which reaches all corners of the world. Voytek Proniewicz made his debut in 2011 with the album “Pupils of Chopin”, also for Naxos. This CD is regularly aired on radio stations in Europe, New Zealand, Australia and the USA.